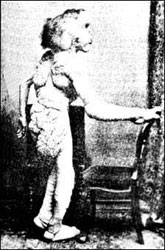 Joseph Carey Merrick born in Leicester, England the 5 August of 1862 and died in London the 11 de abril de 1890. Also known as “the elephant man”, He became famous because of the terrible malformations which suffered from eighteen months of age.

Doomed to spend the greater part of his life enlisted in the world of show business, only found peace in his last years of life. Despite his unfortunate illness he stood out for his character sweet and polite, as well as by an above-average intelligence and that could only demonstrate their aftermath. Although it is not known with absolute certainty, It is believed that Joseph Merrick could suffer a severe variation of Proteus Syndrome, whereby it would represent the most serious case known so far.

To learn more about his life and his illness, You can continue reading this article in the Wikipedia