The novel by Frank Herbert 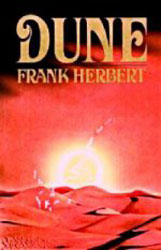 Dune is one of the most important works of fantasy literature, science fiction and general. It was originally composed by three Trilogies, of which is only wrote 6 books. It was published in 1965 and it was rejected by many publishers before finding a home. Their success was overwhelming, won the Hugo Award, and the Nebula Prize to the best book of science fiction. It is considered the largest of the novels of science fiction of all time. It was written by Frank Herbert, an author renowned for his hard sci-fi novels, which he managed to publish five sequels and died in 1986 planning the climax. Apart from inspiration to the film directed by David Lynch, and several others, the book Dune has inspired television series covering the first three novels in the series (Scifi Channel): Dune and Children of Dune, new Trilogies written by his son Brian Herbert, to published by popular demand, the final two parts of this exciting and dramatic story, the saga of Dune.

The story begins more of 20.000 years in the future, in our Galaxy, in a great feudal Galactic Empire. The Empire is divided into quasi-fiefs or planetary manors that are controlled by noble families, known as the great houses, you are grouped in a great tip, called Landsraad, and they pay tribute to the House Corrino. Also conspiranpor the power of the Empire the two “schools of thought”, the space Guild and the Bene Gesserit order, These last focused on political power and the space Guild in the economy. Itself, the story unfolds around the young Paul Atreides, heir to the Duchy of House Atreides. His father, the Duke Leto, It receives the order to move to Arrakis Padishah Emperor Shaddam IV, and his entire Duchy, the only source in the known universe of the Spice melange. Paul must face the treachery of the Emperor, the attack and occupation of Arrakis by their mortal enemies, the House Harkonnen, and survive the hostile planet.

Paul and his family, the Fremen, the Emperor and his minions, the mighty space Guild and Bene Gesserit secret order will be faced in a contest that will change the fate of mankind.

The consequences of putting the reins of power in the hands of superheroes, rather than leaving them to a conscious and responsible for humanity form a theme corollary in the saga of Dune. In a famous interview conducted by Omni magazine in July of 1980, Frank Herbert said:

“Huge problems are created when the human mistakes are made on the scale of a superhero… The heroes are a pain, superheroes are a catastrophe. Errors of the superheroes take us most to the disaster.”

“I had this theory that superheroes are disastrous for human, that though you will create an infallible hero, the things that this hero would launch could fall into the hands of wandering mortals. What better way to destroy a civilization, society or race, to put wild convulsions following his critical judgment and its power of decision in the hands of a superhero?”

He deliberately ignored the super-technology and technical progress, paying great attention to ideas about ecology, religion, culture and humanity. This made that this saga as a provocative and appealing change from science fiction that had previously written should be considered in its time.

The first novel is the most “round” of all, the initial premises are not forced in no time, they are spreading gently so that the reader go getting to it. The philosophical and religious themes of Dune are developed in a story that many have seen parallel to the life of Jesus Christ or Lawrence of Arabia, philosophizing about messianism in first person.

In this story, Frank Herbert is about major policy issues including human susceptibility to manipulation in mass through political propaganda, false religious dogma (e.g.: The Missionaria protective), sexual temptation applied to the upper echelons of Government and the importance of self knowledge and the self-control to resist these forms of manipulation, as well as the study of power and control.

From a historical perspective, many have noticed similarities between the narrative events of Dune, especially in the fact that a man born in proviniente of an old colonial order abroad, Join dispersed and hardened religious nomads of the desert tribes to achieve, and win the freedom of a decadent Imperial power. This is almost a mirror of the Arab revolt of the Middle image at the beginning of the 20th century, in which a British officer T.E. Lawrence mobilized Arab warriors to break the power of the Ottoman Empire in the Arabic peninsula. Although there are many parallels, Perhaps the most bizarre and circumstantial is involving the film adaptations. In Dune (1984) and Lawrence of Arabia (1962), the characters that represent the old Imperial order (Shaddam IV and the Turkish Commander respectively) they are played by the same actor, José Ferrer. In the already mentioned above OMNI with Frank Herbert interview, the latter was the CHOAM as OPEC, equating the precious spice “melange” with oil. Also you can compare with the Dutch East Indies Company CHOAM and concerns over the Spice melange with trade in spices from the East of colonial times.

Other topics explored are the complex interaction of ecology, economy, and technology with above politics and religion. Human feelings and the eugenic controversy are reflected in the love of Jessica by his Duke and the Bene Gesserit breeding program.

The Dune universe suffers from hydraulic despotism (dependence on comforts from a single source, in our time, oil, in Dune, Spice melange.