TWIN PEAKS. Fire Walk With Me 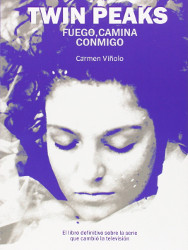 Synopsis: We are now in an unusual scenario: the quality of some American television series exceeds that of most films in this country. The Wire, Boardwalk Empire, Mad Men or the Sopranos, among others, They have been revealed as true masterpieces that have nothing to envy the gran screen. All these programs are indebted to Twin Peaks, the series that opened the doors to a new TV. Apart from go crazy half a world with the mystery of who killed Laura Palmer?, It showed that it was possible to get somewhat brutally good and at the same time to the general public. Introduced experimentation in the cathodic world and reached artistic dimensions that nobody, today, It has passed. In addition, Twin Peaks had a subversive element that today we miss.

In Twin Peaks. Fire, walk with me find the most amazing characters, a Buddhist FBI agent, a giant, a lady with a log, a man from another place. We take coffee and the delicious tart cherries in the double R. And, If we dare, We can walk through the mysterious red room. Fascinating dive to the edge of reality and dream. These pages include the essence of that place called Twin Peaks, a seemingly idyllic neighborhood, that all made it nearly impossible to bury their secrets.

Carmen Viñolo unravels the most legendary television series through the creative process in which it was conceived, from the first idea - the image of a corpse wrapped in plastic on the Bank of a river- until the abrupt cancellation of the programme by the string ABC. Also the prequel that it happened, Fire, walk with me of David Lynch. A film which at the time was, but that today is revealed as one of the best in the Decade of the nineties.