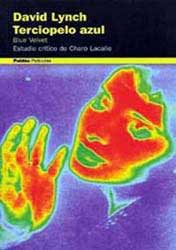 Synopsis: Blue velvet, the film of David Lynch, which many regard as one of the cinematic works of art of the 1980s, It represents a dizzying journey of man (incarnate in the figure of the young Jeffrey Beaumont) by the ins and outs of good and evil are revealed under the quiet, conventional appearance of the American city of provinces. Stigmatized in Venice and winner of the Avoriaz fantastic Film Festival, Blue Velvet remains the most personal and characteristic of Lynch film and represents, exemplary way, the obsessions of a filmmaker who ends up being the undisputed protagonist of his works, as well as the passion for the expressionist compositions that make the director Aesthete and his films painful and unsettling live pictures.

Through the eyes of semiotics which the author projected onto the work complete Lynch, in the book sense keys that hold that portrait will unravel, so subjective and, At the same time, representative, the director makes a certain America. The biography of Lynch and his career are the guides of a text that, as the film that analyzes, becomes an exciting journey.