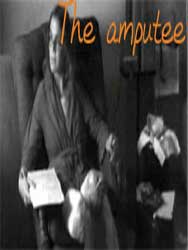 Synopsis: Fred Elmes, friend of Lynch (with whom he worked on Eraserhead) You should test the quality of some film materials. Lynch persuaded him to let him direct a short, resulting in The Amputee, which shows a woman (Catherine Coulson), without legs, in a Chair by writing a letter and a nurse (David Lynch) wrapping his stumps, in a rather clumsy manner, I must say it. The recording is made two times, one for each roll of tape that was recorded, to check the quality of both.