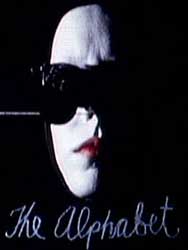 Synopsis: The second short of Lynch uses a combination of real and animated sequences to describe the fear associated with the learning. Is based on a nightmare that told David his niece Peggy Lynch (his wife), to the apostre, He became the protagonist of the short. A girl (the spouse of Lynch, Peggy) is lying on a bed, While the sound of children singing “TO ,B, C” heard background. We then see an abstract animated sequence showing the letters a-z in a sequence with several funds. A flashing “TO” gives birth to two “to” s.

The letters lead to a deformed female figure head, that makes the girl who is in bed is terror. Hear a baby crying in the background, and then a siren. leaves blood spurting from the female figure, then a close-up of a deformed mouth looks.”Please, Remember, you're dealing with a human form”,says the mouth. Lynch shows us many pictures and strokes that will take with them in their future work, as his fascination with the letters and words. As we learn our own ABC, assumes that it is a very important and pleasant experience on the road to communication in the adult world, Lynch prefers to look at the dark side: “I have now told my ABC, tell me that you think of my”. This is the last phrase of the song of the girl in The Alphabet. She expects a eulogy by his learning?, Do you get it? No, Not much.